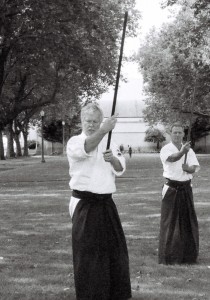 John Thomas Read is widely recognized for his ability to teach the full variety of Aikido technique. Read Sensei has spent the past thirty years teaching both practical technique, and a complete philosophical basis for power through non-resistance. Read Sensei began Aikido in 1969 after a concentrated period of study in traditional karate. Drawn to Aikido as a way to deepen his study of Zen and meditation, he eventually moved to Japan where he underwent a particularly rigorous tutelage under Masters Michio Hikitsuchi (10th dan), Yasushi Tojima, and other instructors of the Kumano Juku Dojo. On returning from Japan, Sensei Read opened Northcoast Aikido in Arcata CA in October of 1977 with formal sanction from Master Hikitsuchi, to provide an environment dedicated to study of the art of Aikido. Since that time, Northcoast Aikido has gained a reputation as one of the oldest, one of the best, and one of the most unorthodox, Aikido dojos in the country.

Aikibojitsu: Primarily consisting of high intensity solo movements, Aikibojitsu provides a direct study of universal laws of energy flow, grounding, center, waveforms alignment, and more.  By exploring these phenomena ever more deeply through interaction with a simple stick of wood, practitioners ultimately face themselves as the staff becomes a perfect mirror.